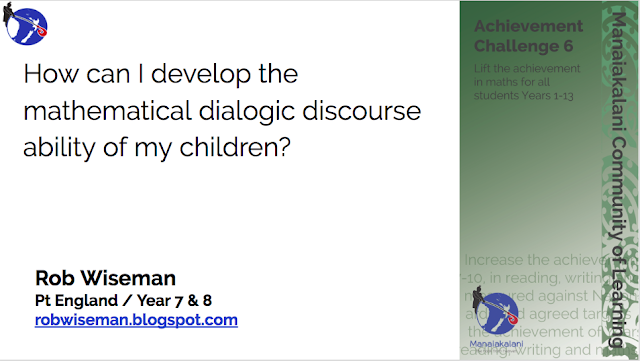 Target Children
My Target group were made up of 3 boys and 3 girls of varying mathematical ability. They were selected because they all struggled to express and justify their mathematical thinking.

What happened for my children?
- More confidence to share
Every child became more confident to share their thinking in class. Anecdotally this is what I was seeing in class as the year progressed. Children who once shied away from sharing were now sharing and children were becoming more confident to speak up when they didn't understand something and question it. This Anecdotal information was verified with the data collected from a student voice survey.

The greatest improvement has been in the children's use of the word 'because'. In the last few months we have really been focussing on using 'because' to justify our explanations. My kids would often explain what they did but would not justify it. This data matches with what I'm seeing with the rest of my class too. It has been slow going and we have a way to go but we're getting there.

Anecdotally the children are talking more and developing the ability to discuss and justify their thinking. Children who were once not engaged are now showing engagement and children who once would not participate in discussions are which is encouraging.

Has this had an impact on their maths achievement?
The jury is still out on this. The Maths PAT data below shows minimal increase in their achievement however these results have been effected by our schools' teachers and children learning and adjusting to DMIC maths. 5/6 of the target children made progress. Their progress average was 4.3 scale points. According to NZCER the national progress average for year 7-8 is 5.4 scale points. The average for the whole class that made progress was 5.1.

What did I do to make this happen?

- Waka paddle prompts
There was deliberate teaching on the type of things one would say if they were effectively explaining and justifying their mathematical thinking. These phrases and words were made into little waka paddles. The children would hold a bundle in their hand and the key was to use them in a maths session. Once you had used a prompt you would discard it. the idea was to get rid of all the waka paddles from your hand. This was used as a way of introducing the phrases and vocabulary into to the children and reminding them to use it. 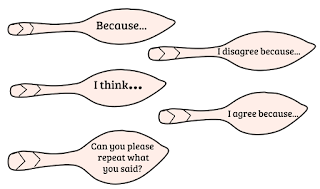 - No hands up
Hands up was banned in our maths sessions. The children soon learnt that anyone could be called on to share their thinking which encouraged them to participate in the problem solving. They couldn't really on the usual eager beavers. At times the eager beavers found this frustrating as they really wanted to be the one to share but as time went on they adapted to the new system and no no hands up is the norm.

- Discussion based games and activities
I used games to help get the children used to using the discussion vocabulary. For example to help ingrain the word 'because' in the children justifications they had to each say the following.

The focus of this was on the because. Starting a maths session with this simple game helped the children explain and justify more effectively when it came to their maths.

Next steps
As mentioned before this inquiry has been pretty slow going and I haven't seen the maths achievement I had hoped to see. I'm interested to see if next year the maths achievement will come now that the children have had a year learning how to effectively engage in dialogic discourse. My hope is that with this embedded in the children they will be able to focus mainly on maths in their maths sessions not on developing their dialogic discourse ability.

Posted by Unknown at 1:43 pm No comments:

As mentioned in a prior post I'm not seeing the progress I was expecting to see at this stage of the year.  Discussing my frustrations with Dr Aaron Wilson he assured me that inquiries which involve a culture and behavioural change are often slow going and can take a long time to see change. So that was reassuring.

The main frustration I have is that my kids struggle to use vocabulary that effectively explains and justifies their thinking. They will to some degree explain and justify their thinking using their own vocabulary however, the person trying to understand their thinking is often having to infer meaning and join the dots.

Among other unused vocabulary and phrases the most common unused word in helping to explain and justify is the word 'because'. Despite having introduced it earlier this year as part of the waka paddle prompts and insisting the children use it while explaining their maths problems the word 'because' is not yet common place in the classroom.

To combat this I'm going to introduce some activities/games where the kids have to use the word 'because' in order to successfully participate/complete the activity. My hope is that by using the word more frequently and highlighting it in a fun way prior to a maths session the children will transfer the use of 'because' to their mathematical explanations and justifications. I'll keep you updated.

I recently presented my inquiry to a group of people at the Manaiakalani hui. While presenting I was asked what have I learnt about myself throughout this process. My response was that I didn't have as much patience as I thought. It is taking much longer than I would like to see a change in my kids which is really frustrating. At times I see glimpses of significant shift in their ability to explain their mathematical thinking then at other it times it's like it's week one, term one all over again.  I'm assuming that this is par of the course however it's still frustrating. I long for the day when those glimpses of effectively explaining and justifying are no longer glimpses but the new norm.

So where to from here? My advice form others has been to keep persevering and keep doing what you know works. The latter part is a good reminder as it's easy in the moment when it's not going well, when I'm feeling frustrated/tired etc to put aside the things you know work. For example using the waka paddle discussion prompts or requiring the kids to speak in full sentences and use the word because in their explanations. So,  I'm going to keep implementing that things that work, persevere, keep the long game in mind and get back on the horse.
Posted by Unknown at 12:37 pm No comments:

Below is the current data taken from a recoded maths session of my target group.

It's great to see the children explaining their thinking more freely however unfortunately they're not using the word 'because' often enough. They say things like "so you go 20.3 x 2 which is ...." but they don't explain why they multiplied 20.3 by 2 therefore, not justifying their thinking. It is also evident that the children are not asking questions of each other off their own bat.

So what can do or change to further develop their dialogic discourse? Although I've introduced the waka paddle prompts, had the children participate in talking activities and modelled dialogic discourse I'm not seeing the results I thought I'd see. This has me wondering do I just need to be more patient or do I have to try something different? Maybe it's a bit of both.

Recently, on my blog, I was challenged by Dr Jannie van Hees to look at incorporating real world maths into my class, to get my kids out of the class to explore the maths around our local environment. She suggested that using "... relevant, motivating, authentic contexts will generate much talk and figuring out....and when suggestions are shared, and justifications expected, rich maths and maths language dialogue will occur." This makes sense to me I guess the challenge lies in incorporating it in my DMIC lessons but I'm sure it can be overcome.

Problem
How do I keep inquiring into this years inquiry while still applying the things I learnt last year? The simple answer is to 'just do it' however when you're engaging in a whole new maths pedagogy (DMIC) this is easier said than done.

Possible solution
DMIC maths sees myself working with half the class while the other half works on independent activities. My plan is to incorporate my learning from last year into the activities the children are doing when they are not with me. I haven't quite worked out what this will specifically look like however I'm determined to put something into place so that my learning from last year doesn't go to waste.

Anecdotally my target group are making progress in their ability to explain and justify their mathematical thinking. They are speaking with greater confidence and are using the word 'because' more frequently. They still often need teacher prompts but I'm finding they don't need as many teacher prompts and are more willing to share their thinking.

The waka prompts have been helpful in giving the kids something to launch from and they they are using them more frequently without me reminding them to use them. Unfortunately the kids still like to play with them and they can be a distraction but they are more useful than not. It has been great to see some of the kids request to not have waka prompts as they are confident they don't need them.

This week I will again be recording and measuring the mathematics discourse of my kids. I just hope the data reflects my anecdotal notes.
Posted by Unknown at 2:57 pm No comments:

First run with the waka paddles

This week I used the waka paddle prompts for the first time. As they were a novelty the kids were eager to use them. At first they weren't using them meaningfully. They viewed it more like a game to get rid of their waka paddles. After some more discussion around the purpose of the paddles and how the prompts needed to be used appropriately and meaningfully the paddles started to be used more effectively. One annoyance is that some kids were more focussed on playing with the paddles than the maths task however, I'm hoping that once the novelty wears off this won't be much of an issue.
Posted by Unknown at 7:13 pm No comments: 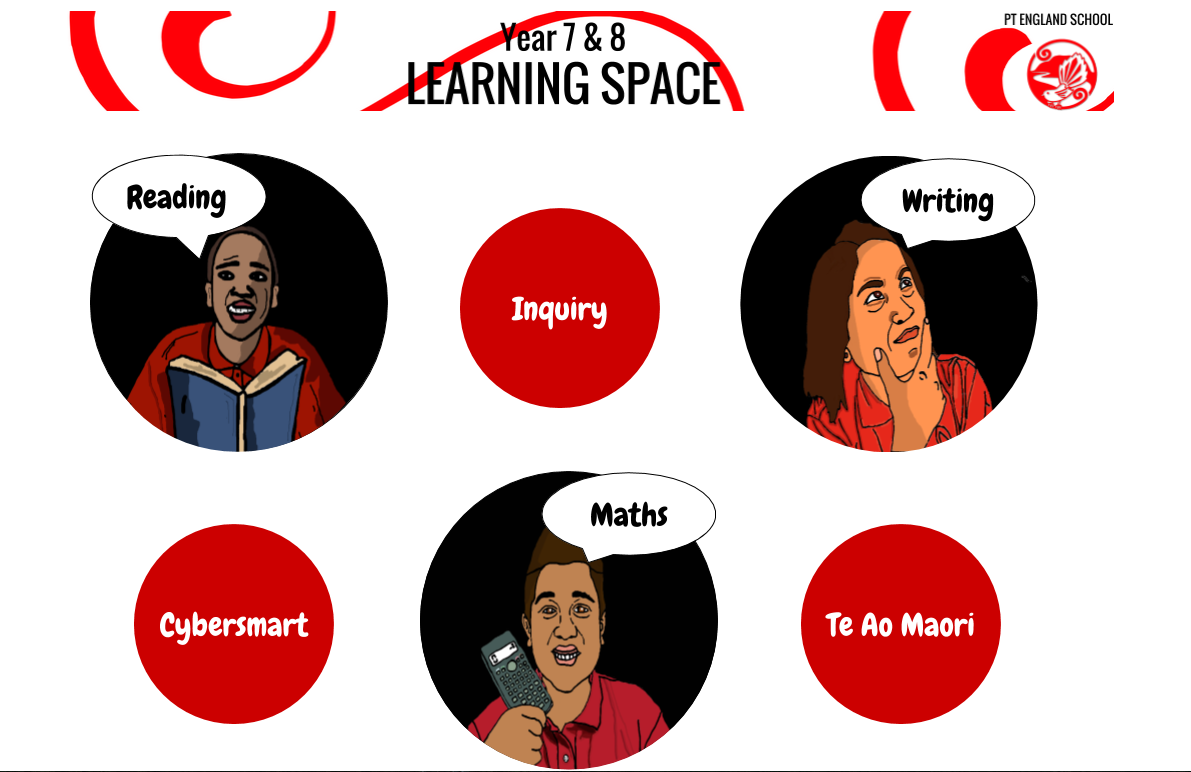 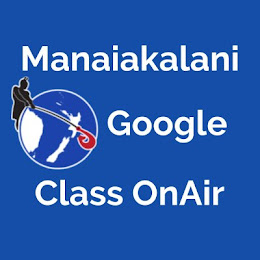